This post inaugurates the recovery of old documents from which we must still learn a lot: oldies but goldies. The first one is almost 40 years old, it is written in Italian and was published in 1971. Its title is 'Tenuta all'aria e all'acqua dei serramenti esterni'. The author is Lorenzo Matteoli.

Why was it important?
Italy in the 70's - as all Southern Europe - had very low quality windows. The typical window frame was made in aluminium, although there were still many hot formed steel sections. Their water and air tightness design was based in the steel sections of European 1930's suppliers: the best ones had two gaskets, one on the outside and one on the inside of the frame.
Lorenzo Matteoli was leading the testing laboratory of the Istituto di Elementi Costruttivi, a branch of the Architectural School at the Politecnico di Torino. By 1971 his team had conducted six years of window testing, and he had extracted some design principles to improve the window performance. I assume he was aware of the work by O. Birkeland and G.K. Garden about rain-screen and pressure equalization, appeared in 1963-64. But in my opinion the bulk inovations of his paper came from analysing the window tests conducted at the laboratory.

After its publication in 1971 this paper became inmediately influencial for facade contractors and window suppliers, but it was especially followed among aluminium extruders who had window profiles to sell. The aluminium extrusion companies were big conglomerates with very basic products, which they had to improve if they wanted to win in the market for new housing, then booming. This paper explained the new idea of pressure equalization and how it could be applied to windows, and it did so starting from scratch. The text is so basic that there are no drawings or references to central gaskets at all. But the concept of a gasket located in the center of the frame and not on the outside was already being applied in Germany, and with Matteoli's help it became obvious what a central gasket could do, and why it was better to have an external open joint between the frame and the sash.

But what did it say? 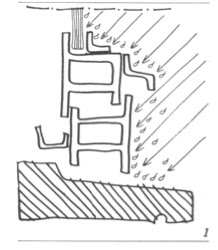 1. The water running along the outer surface of a window...
Matteoli's paper has an additional advantage: it can be understood almost without reading it, because it comes with a number of hand sketched drawings and captions that are the real summary of the paper. I assume not everyone reads Italian, but please have a look at the first four sketches with translated captions here below, and judge by yourselves. 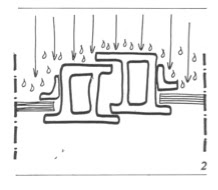 2. ... through vertical and horizontal joints... 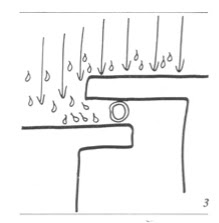 3. ... gets in contact with the outer gasket. Since Pe is higher than Po, water tends to come in, helped by capillarity processes... 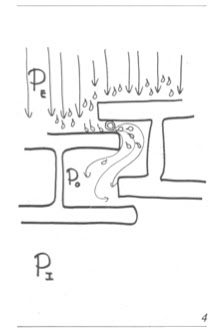 4. ... by pressure differencial and by air movement inside the intermediate chamber, until it reaches the inner gasket where, helped again by capillarity and pressure differencial (Po is higher than Pi), it finds a way to the inside.
Now a personal comment
I first found this document while I was studying architecture in Madrid, at the school Library, together with other oldies as the curtain wall series published by Folcrá in the seventies. It didn´t make an impression to me then, but some years later I was going to be working for one of those big aluminium extruders: Hydro Aluminium, owner of the window brand Domal. At Hydro's technical department near Milan, led by Massimo Dampierre, this document appeared again. They told me the story of the evolution from the two gaskets to the central gasket, the move from punched hinges to a channel where all accessories could be fitted and removed (the 'European channel'), the birth of thermal break profiles. The Italians had coined a hip name for the new family of windows that became popular in Southern Europe: these new windows were 'systems', just because their elements were interchangeable. You can use the same glazing bead profiles, gaskets or acessories for different window types and it works, saving time and reducing stock at the window manufacturer. Now it's pretty obvious and has become standard, but it all started at a hidden testing place in Turin...
A real pleasure to read. The whole document is just seven pages long: go to the link and check your Italian!
Posted by Ignacio Fernández Solla at 20:09

Email ThisBlogThis!Share to TwitterShare to FacebookShare to Pinterest
Labels: oldies

Thanks for sharing such a great blog... I am impressed with you taking time to post a nice info.
Windows And Doors Phoenix
Home Window Installation