Timber construction is an art, specially when deployed by the crafted Japanese carpenters of past centuries. Apparently, even if there are still artisans who keep some of its secrets today, the subtleties of Japanese timber joinery have disappeared from Nippon architecture. Kengo Kuma is the only name that comes to our mind if we think timber and contemporary Japanese architecture. But projects as interesting as One Omotesando in Tokyo (see the images below), with its main facade protected by thin vertical fins of larch wood, use timber more like a skin care rather than as a construction material. Timber here is the wrapping, not the real thing. The same technique was used by Kengo Kuma at the Nagasaki Art Museum, this time with louvres made of stone instead of timber - although it's difficult to find out from a distance!

Has timber joinery disappeared from contemporary Japanese architecture then? Well, not yet. 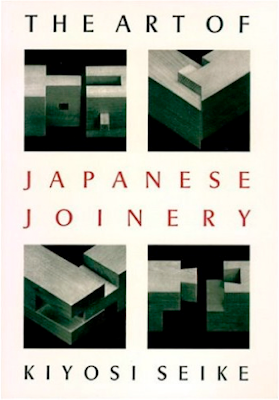 'The Art of Japanese Joinery' by Kiyosi Seike is the best introductory book into Nippon wood joinery as an artistic craft. The book starts with the history and philosophy of Japanese architecture as it relates to joinery, then follow many pages of great black and white pictures of wood joints. Only 48 types of joint are presented, selected from among the several hundred known and used today. Joints range from the simple scarf joint to the insanely complex ones. Some of them are truly puzzle-like in construction. The text continues with a chapter on the functions of Japanese joinery, then a chapter on Tsugite or splicing joints and finally Shiguchi or connecting joints, both of which have drawings showing the construction of the joints with hidden lines for further clarification (or obfuscation?)

Wikipedia will help us enter the world of splice joints or Tsugite. A splice joint, in Japan and elsewere, is a method of joining two members end to end in woodworking. The splice joint is used when the timber pieces being joined are shorter than the length required by the construction. Splice joints are stronger than (unreinforced) butt joints and have the potential to be stronger than a scarf joint. The most common form of splice joint is the half lap splice (see below left), used in building construction to join shorter lengths of timber into longer beams. Connection has to be achieved using glue, nails or screws. The beavel lap splice gains profit from geometry, with its dovetailed shape. Things start to get more complex with the tabled splice joint, where glue or nails aren't working in shear any longer.

A variation of the latter is the wedged tabled splice joint (see below right), where two interlocking wedges close the gap and secure the connection of the two timber pieces with each other. Here we don't need to nail or glue the joint and even better, we can disassemble the two pieces if and when needed. We got it: this is Tsugite, we have just entered the Japanese timber joint world.

Some may think this is nice stuff for DIY aficionados with time to spend on the weekends. Is there a way to apply the intricacies of joinery shown in Kiyosi Seike's book to real life construction? Where will we find the carpenters and the time for doing this - not mentioning the money to pay for it? There is a way, and it's called CNC woodworking machinery. State of the art woodshops today are employing computer numerically controlled pin routers to cut wood, and are using vacuum holding fixtures and autoclave-like devices for joining solid wood. They can even glue wood with glues that harden only in the presence of radio waves. A longish Youtube video - but worth seeing for a couple of minutes - shows one of these Japanese timber frame joinery machines at work.

So timber in Japan is an abundant material, there is a milennary joinery knowledge and there exists CNC machinery to cut and join timber for construction purposes. One would expect to see hundreds of buildings in Japan using timber as structural or as finishing material, both for outside and inside applications. That is not the case though, and this was the reason why Mokuzai Kaikan (the Tokyo Lumber Wholesalers Association) decided to promote timber as the material of choice at their new headquarters in Tokyo.

The Mokuzai Kaikan office project was commisioned to a big architectural firm in Japan, Nikken Sekkei. The numbers in this studio are impressive: founded in 1900, the firm was 29 strong by 1904 when they finished their first big project, the prefectural library in Osaka with a neo-classical style. Now they are almost 2,900 between architects and engineers, and their projects extend all along the Pacific rim. The Wholesalers Association project was directed by Tomohiko Yamanashi, principal at the architectural design department, in coordination with Takeyuki Katsuya. Yamanashi and Katsuya embraced the idea of promoting the use of timber as requested by their client, and wood became the leit motiv of the project. 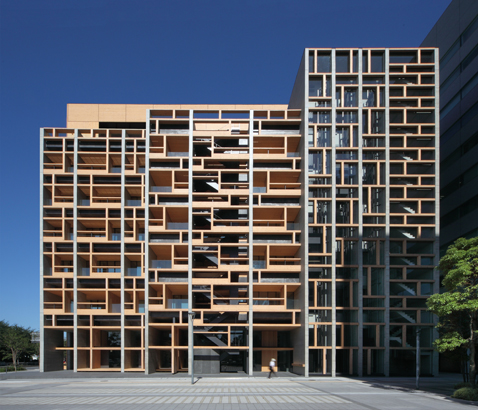 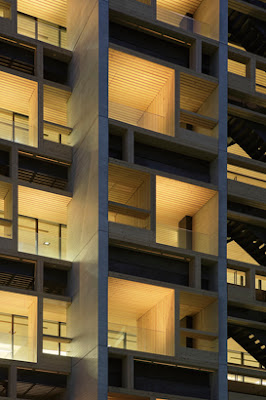 This is the outline of the Mokuzai Kaikan project as it appears at Nikken Sekkei webpage:
This project involved the relocation of the offices of the Association of Wood Wholesalers in Tokyo. It serves as a showcase to demonstrate the possibilities of wood as an urban construction material. Engawa, or Japanese terraces, allow a natural breeze to enter while shutting out strong sunlight for a comfortable indoor environment. Lumber were integrated into the building's structure, and architectural exposed concrete was cast in cedar formwork. Since the building uses a large amount of wood, great attention was given to fire safety measures. The design focused on creating spatial continuity with the use of layering and natural light.
The building also revives and adapts another of Japan’s architectural traditions through the use of the Engawa (see night image to the left), a terrace space prevalent in traditional homes. In accordance with earthquake regulations, the 7,582m² seven-storey building employs reinforced concrete for its structural frame. Beyond this, timber was specified wherever possible. The architects paid close attention to detail, fitting the main concrete frame with the secondary timber elements. Concrete was cast in cedar formwork, maintaining the scale and grain of the timber (see below left). 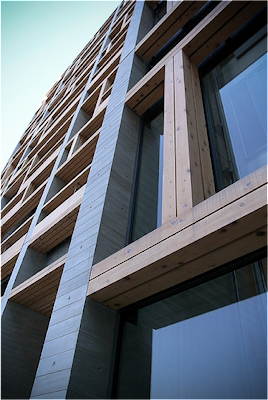 In terms of the timber elements themselves, everything that can be seen is formed in 105 x 105 mm sections of Japanese cypress; a standard off-the-shelf product. These sections are used in composite panels to create the distinctive cubic Engawas, but they also form the remarkable longitudinal beams that span the full length of the 25m rooftop assembly hall. Here is where the art of Tsugite reappears, and in a way that mixes tradition with modern requirements.
Each cypress element is just 0.105m high x 4.0m long, and it had to be connected to those above, below and beside to conform a 1.6m high x 25m long beam. The connection system owes something to the traditional joinery - you can see timber wedges in vertical, combined with wooden oak plugs that connect every two pieces in horizontal. Tabled spliced joints can be seen both at the top and the side of every element. But there are also stainless steel rods - or should we say long bolts? - that keep all timber pieces working together as a 1.6m high beam. In order to avoid the concentrated tension around bolts to fracture the wood under extreme stress, cilindrical aluminium rings have been added around each passing bolt.
The exploded detail can be seen here below, extracted from an article about the Mokuzai Kaikan office appeared on The Architectural Review. The following images, the assembly room plan at the upper storey, the vertical section and the Engawa 3D drawing have also been taken from the same article. 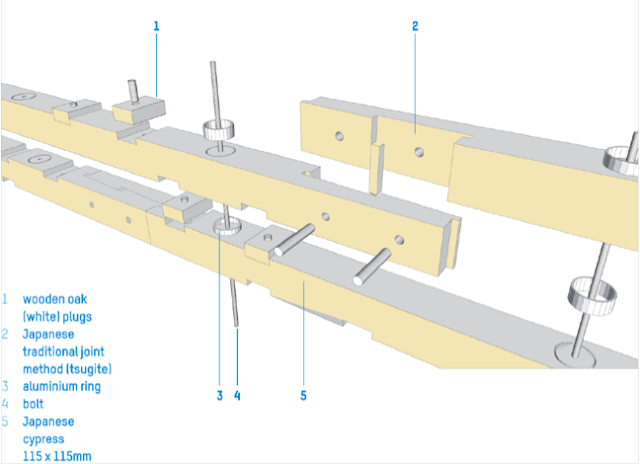 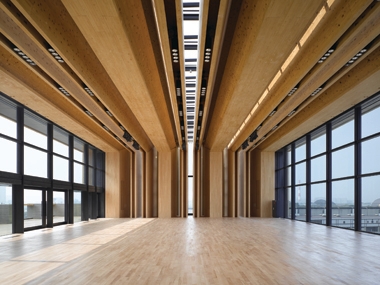 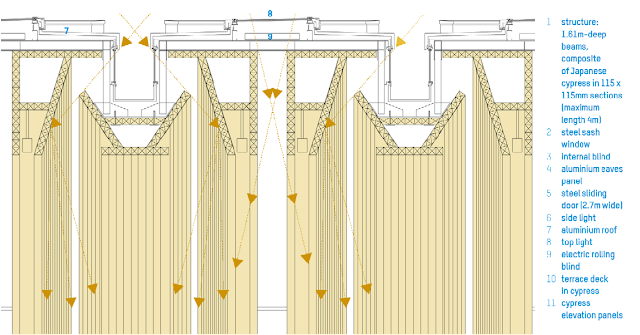 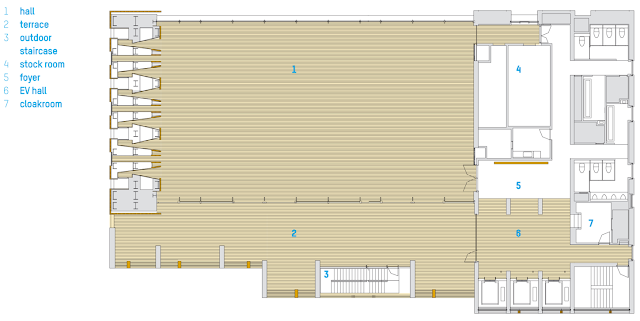 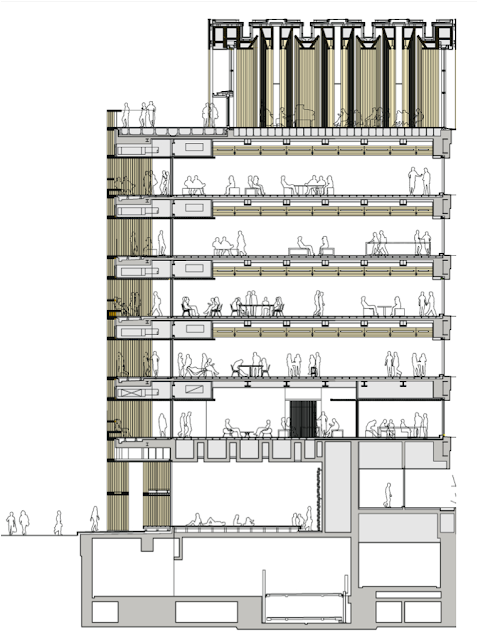 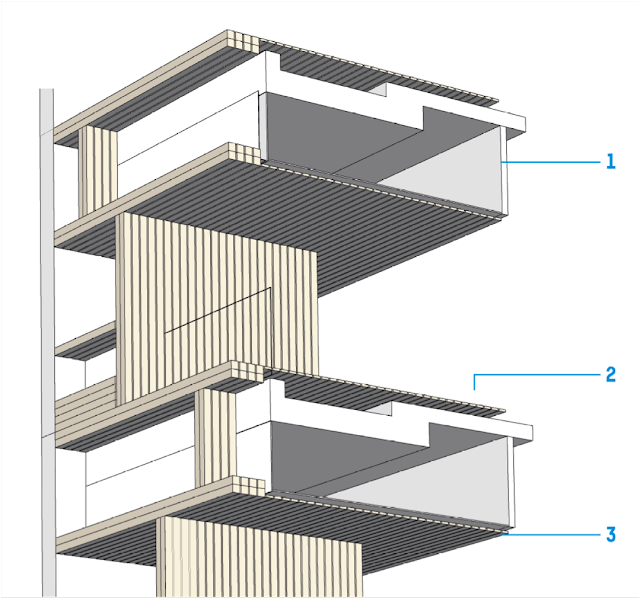 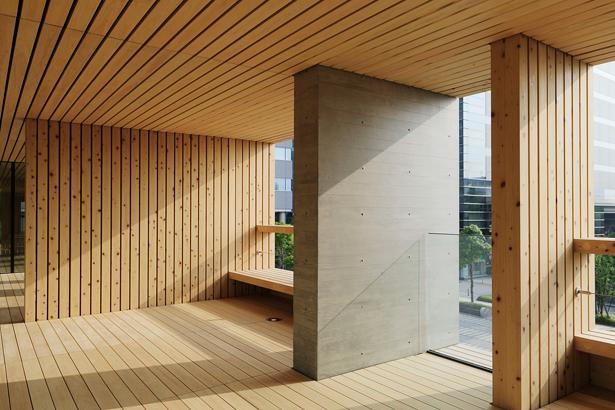 The Mokuzai Kaikan office was built between Nov 2007 and June 2009. The project received a Special Jury Award at the 3rd annual MIPIM Asia Awards 2009 held in Hong Kong. I invite you to see some stunning images of the interior here (go to the bottom of the page)
How will the lumber perform on the outside say 10 years from now? This remains to be seen. I have not found any information about the surface treatment these cypress logs have undergone - if someone out there knows more, please shout. One final critique has to do with the side facade, visible at the images from the link above. That facade doesn't seem to be the best part of the building. But all in all, Mokuzai Kaikan is a great example of architecture well delivered at all levels, from the concept phase to the 1:1 details, from programme to materials selection. The front facade is an example of intermediate, filtering space, one that moves forward from the typical flat, barrier-like glazed facades we are used to these days.
There is another project I find vaguely similar to this one, located in a very different place place and context: Louis Kahn's Salk Institute at La Jolla in California (1959-1966). Sorry, but I can't find a better way to finish this post than by paying a little homage to the old master.

Posted by Ignacio Fernández Solla at 08:26

Amazing Content, Thanks for sharing.
Structural Analysis in UK

I will recommend anyone looking for Business loan to Le_Meridian they helped me with Four Million USD loan to startup my Quilting business and it's was fast When obtaining a loan from them it was surprising at how easy they were to work with. They can finance up to the amount of $500,000.000.00 (Five Hundred Million Dollars) in any region of the world as long as there 1.9% ROI can be guaranteed on the projects.The process was fast and secure. It was definitely a positive experience.Avoid scammers on here and contact Le_Meridian Funding Service On. lfdsloans@lemeridianfds.com / lfdsloans@outlook.com. WhatsApp...+ 19893943740. if you looking for business loan.

Keep up the excellent piece of work, I read few posts on this internet site and I conceive that your web site is rattling interesting and has got lots of superb information. There are so many fun and exciting Things to do and experience around the world that I thought I'd put together a list of my favourite things to do for all travelers ...

Its like you read my mind! You seem to know a lot about this, like you wrote the book in it or something. I think that you can do with a few pics to drive the message home a little bit, but other than that, this is great blog. A great read. I will definitely be back.raytools protective lens south africa