The Ledge at the Sears Tower in Chicago: glass is the limit

There can't be more stories written about the design, engineering and construction of such a small part of a building as for The Ledge, the latest attraction at the tallest observation point in Chicago. The Ledge is really small in number: just four glass boxes, all the same. And it's small in size too: each box is 1.3 x 3.2m in plan, and close to 3.6m high. But there's one detail that makes all the difference: these four fully glazed boxes are cantilevered from the 103rd floor of the Sears Tower, at 413m above the ground. Glass Google pages and technical papers at recent facade conferences are filled with stories about it.

Why so much fuss about glass boxes? Well, the image says it all. 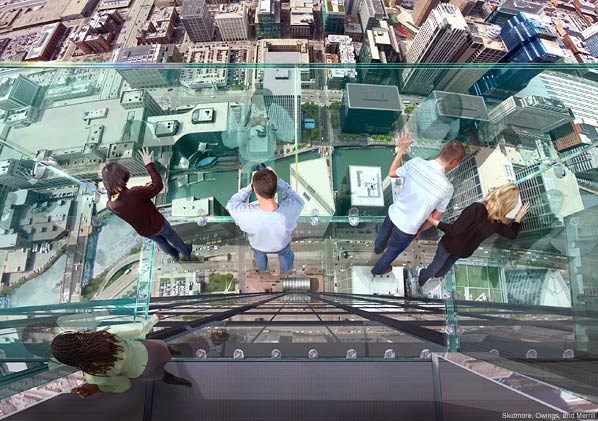 The Sears tower (since 2009 sadly renamed as Willis tower) remains the tallest building in the Western hemisphere. Completed in 1973, its 442m (without counting the spires) are still today an impressive height for a building. The Sears tower observation deck, called the Skydeck, is located on the 103rd floor of the tower, and its view 412 m above ground is one of the tourist attractions in Chicago. Visitors, up to now, could experience how the building sways on a windy day. Now they can also feel a different sensation: that of sheer vertigo.

In January 2009 the tower owners began a major renovation of the Skydeck including the installation of four glass balconies, extending approximately 1,2m over the west facade from the 103rd floor. The all-glass boxes allow visitors to look through the floor to the street 412m below. The Ledge opened to the public on July 2009.

The Skydeck renovation project was awarded to Skidmore Owens and Merrill (SOM), the architects who designed the tower. The picture above shows a realistic image of their intention: glass all around, no steel structure at all if possible. “The Sears Tower set architectural and engineering standards when it was first built and now we are able to carefully craft new elements that expand the capabilities of the original design while retaining its integrity,” said Ross Wimer, design partner with SOM and one of the fathers of The Ledge idea. A 360º view of one of the glass boxes (this is not a render) is the nearest you can be to the real sensation of stepping in (or out?) there. 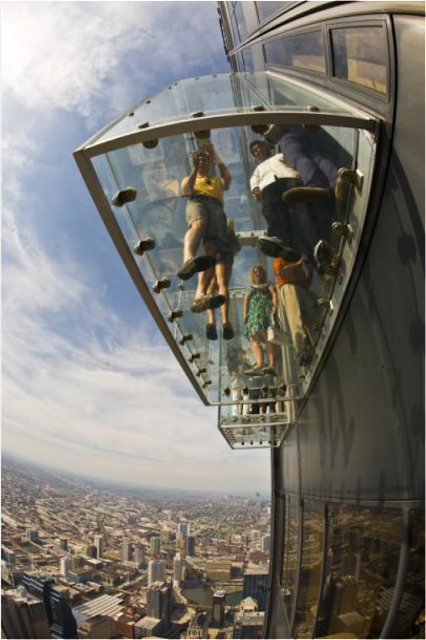 Architects must be praised for the idea, but engineers - glass specialists - were needed for its detailed design and realization. The building owners contracted Halcrow Yolles in Toronto as engineers for the observation boxes, and gave them the responsibility of fully design and detail the glass and steel components. Halcrow's senior principal and structural glass engineer was at the time John Kooymans, one of the few who can say 'The Ledge is my baby'. Around the end of 2009 John moved from Halcrow to another Canadian engineering team, MTE Consultants in Ontario (the name means More Than Engineering). If you visit Halcrow and MTE webpages you will find how both companies claim having authored the engineering design of The Ledge - and both are right!

There are two articles describing the design of the glass boxes both written by John Kooymans, one as part of Halcrow Yolles and the other one written this year as member of MTE. According to the first paper, publised in Glass Performance Days 2009, the challenges to solve were many: 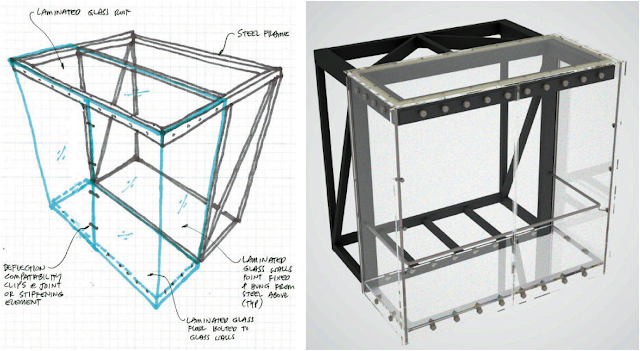 The second paper by John Kooymans is the one that originated this post: I read it at the proceedings of Engineering Transparency, a conference held in Glasstec Düsseldorf last 29 and 30 September. Carlos Prada and María Meizoso, two colleagues from Arup Facades Madrid, attended the conferences and brought the news back to us. You can have access to the paper here, through the MTE webpage.

Each box face can withstand design wind pressures of 4.6 kPa, and the roof and floor wind pressures of 6.0 kPa. At the floor there is an additional live load of 4.8 kPa due to its intended occupancy. As Kooymans puts it, it can essentially hold more people than it can fit.

The corners and intermediate joints where the different wall panels come into contact with each other are simply stitched together with stainless steel angles and through bolts. The floor is stitched to the glass walls creating small local opaque connections that allow for the transfer of external loads into the hanging glass panels and subsequently, into the steel cantilevered frame.

From John's Glasstec paper:
The glass had to be designed with enough redundancy to ensure that any accidental breakage would not result in a total collapse of the system. For this reason, three layers of glass were selected for all the elements. The structure was designed so that only two layers of glass were required to resist the design loads, and only one layer of glass would be able to support the self weight of the structure. In addition to this design decision, the glass floor was constructed using an ionoplastic interlayer (SentryGlas Plus) captured by the through bolts in the floor which would ensure the stiffness of the tempered floor panel would remain intact in the remote possibility that all three structural glass lites failed.

In the end, the glass box elements are all created with three layers of 12 mm tempered low iron, heat-soaked glass. The requirement of heat-soaking helped eliminate the potential for spontaneous breakage due to nickel-sulphide inclusions. 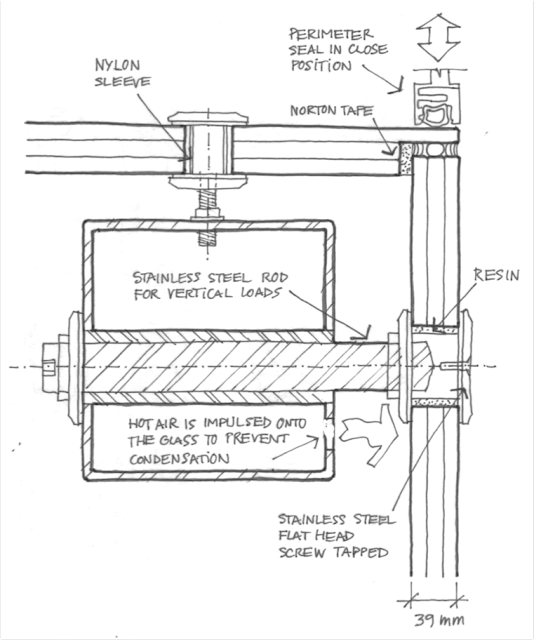 If the engineers of The Ledge were Canadians, the facade contractors are pure Chicagoans, and making part of the city building history. MTH Industries, located in Hillside, Illinois, started building glass facades in Chicago back in 1886. Upon first hearing about the project, Ludek Cerny, vice-president of glazing at MTH Industries, thought it was pretty unusual. Because of that, MTH wound up taking on a design-assist role.

Load tests done in-house by the contractor (see images above) involved loading a glass lite that was half the size of the actual floor of the bays to 2½ times the required code load for a 24-hour duration. “The test was later repeated with fracturing one of the lites with the actual design load,” Cerny says. That wasn’t enough for this team: “Out of curiosity,” Cerny says, “we actually broke more lites and realized that you could still stand on the glass floor with all of the lites broken.” Miracles of ionoplastic interlayers.
In addition to avoid damage from breakage, the design includes ways of protecting the bays from daily wear as well. There is an anti-graffiti film on the inside of the vertical glass units. The laminated floor has a 6mm sacrificial layer of fully tempered, heat-soaked glass on top that can be removed or replaced if it gets scratched, cracked or damaged. The stainless steel fasteners that support the glass panes to each other are bespoke and have been custom-machined by MTH.

The motorized system that projects and retracts the boxes from the building utilizes steel LinearBeam mechanical linear actuator systems. The systems operate with a rigid chain technology. A rigid chain is a mechanical actuator that is flexible in one direction and forms a steel beam in the other direction. The contractor worked with the supplier to design the locking pins and the control systems that secure the bays.

Because of the movement, the perimeters of the bays are lined with inflatable seals. When the bay is in the viewing (outside) or in the maintenance (flush) position, the seals inflate to create a secure air and water lock for the building.

Vertical movement - that is, transporting the box material up to the 103rd floor - proved to be one of the bigger challenges for the contractor. The installers moved the glass units and the 5.5m suspension beams up on the top of elevator cars. To ease the material handling, MTH ended up creating custom tools to help hoist and carry. “It was all a conglomeration of things that already existed modified to work under these conditions in the space allowed,” Cerny adds.

The laminated glass units forming the walls and the roof have three tempered 12mm lites of PPG's Starphire low-iron glass. The walls and roof are laminated with clear PVB, while the floors are laminated with 1,52mm DuPont’s SentryGlas Plus interlayers. The glass fabricator was Prelco of Montreal. Prelco delivered its last panel in April 2009, six months after the company began fabrication and two months before the end of the installation on site.

This article from The New York Times has a very interesting short video abour the building of the Ledge. Scroll down and you'll find it on the right. Not to be missed! 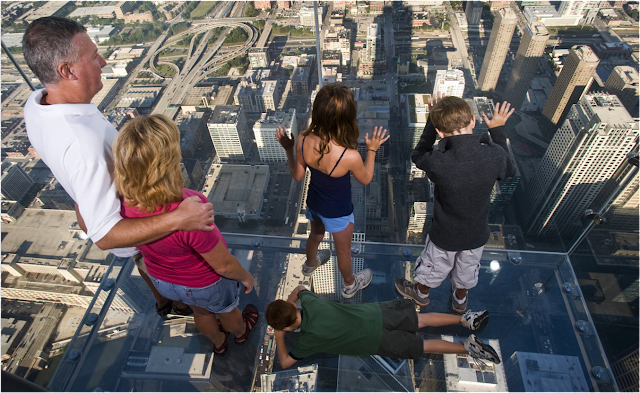 The final image is my personal homage to the vision of all the people involved in getting these glass boxes real: from the owner to the architect, engineer, contractor and every supplier. Compare this image with the first render, drawn by the architects in 2008. One year later, the built thing is astonishingly similar to the design intention. In fact, it is even better: by selecting low iron glass, the green aspect of the standard glass used in the first image has disappeared.

Could such a small job have been done better?
Posted by Ignacio Fernández Solla at 17:54

Thankyou so much for this article - I am an architecture student working on a similar project at the moment and this was very useful.

I seriously love your website.. Very nice colors & theme.
Did you develop this website yourself? Please reply back as
I'm hoping to create my very own site and would love to learn where you
got this from or just what the theme is named. Kudos!

Engineer of Record was not John Kooymans rather Terry McDonnell currently with SGH Engineers, an Illinois resident.

You got an incredible blog .I will be keen on progressively comparable themes. I see you got actually quite helpful subjects, I will be continually checking your blog much appreciated. Celebrity net worth is a website which reports estimates of the total assets and financial activities of celebrities. Read it for more information.

Good day! This post could not be written any better! Reading through this post reminds me of my good old room mate! He always kept talking about this. I will forward this article to him. Pretty sure he will have a good read. Thanks for sharing! Alexandr Shcolyar