This is the news from The Telegraph.co.uk, yesterday morning: 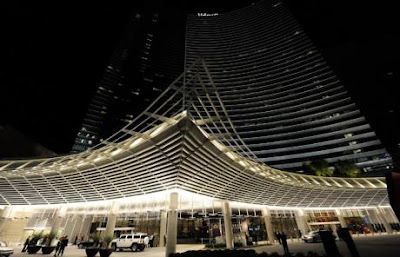 Guests burned by 'death ray' from Las Vegas hotel
Holidaymakers at the Vdara hotel reported that their hair had been singed and that plastic bags had melted in the heat of the hotel. The hotel's owners said that the tall, concave tower collected and intensified sunshine to create what staff call a "death ray" focused on the swimming pool area.

Bill Pintas, a lawyer from Chicago staying at the hotel, said that he suffered from the heat soon after noon one day. "I'm sitting there in the chair and all of the sudden my hair and the top of my head are burning," Mr Pintas told ABC News. "I'm rubbing my head and it felt like a chemical burn. I couldn't imagine what it could be. I used to live in Miami and I've sat in the sun in Las Vegas 100 times," he said. "I know what a hot sun feels like and this was not it."

Mr Pintas also showed how the black lettering on his white plastic carrier bag had been burned through by the sun. Plastic bags are typically made of polyethylene, which melts at about 120 C. 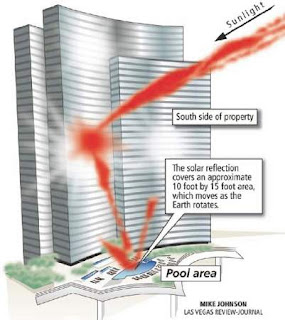 Gordon Absher, a spokesman for MGM Mirage, the hotel's parent company, said they were aware of the problem. "Because of the curved, concave shape of that hotel, they sometimes get isolated pockets of high temperatures," Mr Absher said. He said a film applied to the hotel's exterior had stopped 70 per cent of rays being reflected, but conceded this had not been enough.

Designers are now working to address what he called "solar convergence", he said.

Well, these are the reported news. We facade guys are aware since some time of similar situations, always located in hot areas of the world. This was up to now called a concave mirror effect, or simply hot spots, although death ray sounds much more interesting!

Why does this occur? And how to avoid it?


Why does a hot spot happen?
The reason is simple: modern glass with solar control coatings has a rather high solar energy reflectivity. Most of the radiant energy arriving from the sun to the outer glass pane gets reflected to the outside (instead of crossing the glass). This is a desired effect to avoid too much overheating inside the glazed spaces.

When the glass surface is flat or convex, the reflected radiation is dissipated onto the atmosphere. But things change when the outer glass surface is concave. Then, depending on the curvature radius, sun rays can concentrate in certain points along the day, varying with the sun position. If these points are located in the air surrounding the building, nobody will realize about them. But, if one of the concentration points (the foci of an ellipse or the center of a circle) falls in an area where there is something sensible to extra heat, then we see the consequences. There is a very clear example in Milan. Sun rays coming from the new headquarters of the Lombardia Region in Milan are overheating and deforming the PVC roller shutters of the neighbouring buildings, as shown in the image below from La Repubblica. The problem has been there since summer 2009. You can see more images at the picture gallery from the newspaper. 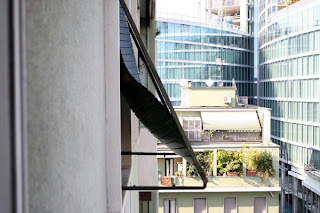 How can we measure it?
A pyranometer is a sensor that  measures broadband solar irradiance on a planar surface. What a pyranometer reads is the solar radiation flux density (in W/ m2) from a field of view of 180 degrees. If solar irradiance data in a certain area are clearly higher than the average solar radiation in the region, the pyranometer can check it and measure it. After taking a number of measurements along two-three days we come out with a 'plan of hot spots': a distribution of unexpected solar radiation values, measured in flux and in surface temperature. So, knowing if Mr Pintas, the lawyer from Chicago burned at the Vegas hotel, was right or was exagerating would take around three days work with this device.

And how can we avoid it?
This is difficult once the glass concave surface is in place, because the owner is not inclined to change the building shape at this stage. The obvious solution is to avoid concave surfaces with highly reflective glass. So, the typical way out of the fuss is to add a film onto the outer glass face that reduces the energy reflectance.

A reflective glass can have an energy reflectance value of 40%, which is really high. This is the appearance of a magnetronic or pyrolitic 'mirror glass'. Luckily architects don't favour this appearance nowadays (except in Vegas, Dubai or Shanghai, where the problem is most common). The funny thing of the building in Milan - which is not concave, but convex - is that the effect is accentuated because there are several glazed walls, all with a double skin curtain wall. The external film can reduce the reflectance to a value below 15%, which is the typical energy reflectance of a non tinted - non coated double glass unit. Values as low as 8% can be achieved. It goes without saying that energy does not disappear: if it's not reflected, it must be absorbed, heating the outer glass pane. This can have two further consequences: first, the facade becomes a heat radiator to the internal space in summer (a glazed frying pan). On the other hand, the high temperature of the outer glass, combined with some external shadow (if this exists), can break the glass unit due to 'thermal shock'.

This is a well known problem. The way to avoid it is not using annealed glass, but heat strengthed or toughened glass on the outer pane - the one with the highest heat absortion due to coatings or tints. The problem with the post-applied film is that the extreme temperature difference (between the sun-hit and the shadowed parts of a glass) increases, and it can affect the inner glass pane as well, which is usually not thermally treated. So, before applying any anti-reflective coating, our colleagues in Vegas should better do some thermal calcs, or they would get rid of hot spots at the cost of having glass breakages at the hotel rooms in the near future.

We can of course predict if a certain building shape can create hot spots or not during design stage (using 3D modelling tools), and then adjust the building shape or the glass reflectivity to avoid them. I would strongly recommend to do it, or we will have more lawyers coming to us in the future. The existance of "death rays" is official now...

Posted by Ignacio Fernández Solla at 07:27

Email ThisBlogThis!Share to TwitterShare to FacebookShare to Pinterest
Labels: technology

Righthaven LLC of Nevada has aquired the copyright to the Vdera Death Ray Image
that is posted on your site. They are actively suing sites that have posted
it claiming copyright infringment. They will sue you without warning and force
you into a settlement by threateing $150,000 plus your domain name.
I am sending this warning so you will not become a victim of Righthaven.
Take down the photo ASAP.

You might qualify for a new solar program.
Click here to find out if you qualify now!

Really nice content shared by the author. Aluminium doors and shopfronts are the best way to design your shop's facades. ADV Contractors are providing these shopfronts with the security systems like sensors, cameras and multiple locking systems.