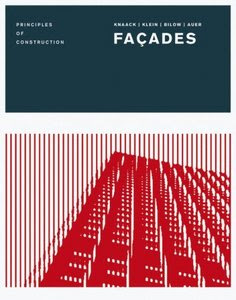 Is there a need for yet another book about facades? Yes, if you are looking for a basic understanding of the facade and its technical realization in a more fundamental manner. Facades: Principles of construction is a very simple and well organized introduction about facade design. If you are a student and are interested in facade design and construction - that is, in how a facade works - this is the book to start with.

Professor Ulrich Knaack, the main author, is head of the Chair Design of Construction at the Faculty of Architecture, TU Delft. In 2005 he founded the Facade Research Group and is iniciator of the conference series 'The Future Envelope'. The other three authors are Auer, Klein and Billow. Thomas Auer is a partner at Transsolar in Stuttgart. He specialises in the field of integrated building services. Tillman Klein is an architect and heads the Facade Research Group at TU Delft. Marcel Bilow is a research associate with Professor Knaack at the University of Applied Sciences in Detmold.

The book presents the design process of a facade as a sum of progressive steps. Chapter 2, From wall to facade, discusses the development of today's facades and their typological classification. Chapter 3, Principles of construction, explains the interrelation between the building structure and the facade system. Chapter 4, Principles of detailing and tolerances, covers the generation of technical details for the general solutions defined previously. Topics such as integrated design and building physics aspects of the facade are discussed in chapter 5, Climate and energy. Chapter 6, Adaptative facades, analyses how facades can adapt to changing parametres. Chapter 7, Case studies, illustrates typical and special facade solutions on the basis of selected projects. In closing chapter 8, A look into the future, the authors provide an outlook into possible developments in facade technology.


The problem with facades design and construction, in relation to past eras, is that envelopes have become a complex structure with numerous functions and a difficult technical realization. Thus, the prevailing trend in facade technology is its increased complexity. Two paths of design have tried to answer this complexity: one, the separation of each performance requirement in a specific layer and / or material; the other, the search for integration via adaptability. The real message of this book - and quite relevant for us, regardless we are students or not - is the authors' preference for an integrated envelope instead of a multi-functional facade concept.

In 1981 Mike Davies - while working for Richard Rogers and Partners - formulated the idea of a polyvalent wall in an article signed with Rogers and titled 'A wall for all seasons'. Here, several functional layers within a glass element were to provide sun and heat protection, and to regulate the functions automatically according to current conditions. The wall itself (see the image above) was to generate the necessary energy. As a matter of fact, the label 'Intelligent wall' derives from Davies' concept of the polyvalent wall. His idea, not yet realized, still acts as a driving force for new facade technologies, and many researchers have been engaged in this topic over the last two decades.

Knaack and his colleagues, following Davies' steps, start by presenting the concept of an integrated facade in a more macroscopic - and realistic - way (see page 100 of the book). It seems reasonable - they argue - to integrate heating elements, air-conditioning and ventilation units, movable shading and other appliances into a facade module. These functions can be combined on the basis of a modular design principle. We could cite some examples where this has been already achieved, as in the Capricorn House in Düsseldorf (image to the right), where decentralized ventilation components and lighting are integrated into the enclosed facade elements.

But later in page 130, when discussing the future facade trends, the authors come up with their search for the almighty facade: a further integration with the building services and the structure of the building, all in one. This is the Holy Grial of tomorrow's facade, but it won't be easy to achieve. In their own words:

The future facade has to be based on an integrated concept, i. e. it has to combine and regulate functions that in some cases might contradict each other. (..) This leads to the question of how the facade should be structured - all in one layer or stacked on top of each other. The smaller the components, the easier and better they can be spatially arranged in the facade system. (...) The integrated facade is a vision that will materialise progressively throught the development of new components and technologies.

Email ThisBlogThis!Share to TwitterShare to FacebookShare to Pinterest
Labels: books

HI! I am an architect student from the Dominican Republic. I would like to know if you have any other information about polyvalent facades and your opinion about them. Thank You!

principles of construction is really nice book and its give me good ideas and also tell me how make a building and how to make new designee with new tips thanks for share it wordpress two factor authentication .