U-value: a not so well-known concept

Most of us have a general idea of the concepts of U- value and g- value when dealing with thermal properties of facades. This post presents some issues not so well known about U-value. A future one will deal with g-value and finally a third one will unify both of them under a building physics perspective. 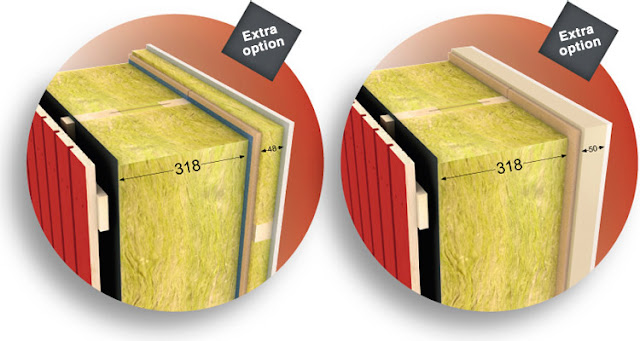 
Let's start with the basics we know already.

The U-value of a glass pane is determined in Europe by calculation according to EN 673 or by measurement according to EN 674. Under the same boundary conditions, calcs and measurements result in very similar U-values. Funnily, the American code for glass, ASHRAE/NFRC, yield a slightly worse (that is, higher) U-value than the European standards. The difference can be around 0.1 - 0.2W/m2ºK. Furthermore, the ASHRAE U-value is separated into winter and summer conditions.

Does U-value measure convection, conduction or radiation?
It is clear that g-value refers to solar radiation through transparent materials such as window glass surfaces. It does not measure heat exchanges due to conduction or convection. What about U-value? Does it only measure heat flows due to convection and conduction, or does it also measure radiation? Interestingly, the primary mode of heat transfer impeded by thermal insulation in a facade is convection, but in fact U-value measures heat loss by all three heat transfer modes: conduction, convection, and radiation:
Thermal conductivity of common materials
Thermal conductivity (expressed by the Greek letter lambda) is a thermal property of a material, of its ability to conduct heat. It is measured as the rate of heat flow (W) over unit lenght (m) through that material over unit area (m2), caused by unit temperature difference (K): W.m/m2.K, by cancellation: W/mK. The lower the conductivity of a material, the better it acts as a thermal insulator.

Glass has a thermal conductivity of 1.05W/mK. Is this high or low? It is rather high, although very small if we compare it with metalic materials as steel (54), aluminium (250) or copper (401). Glass is a rock, so its thermal conductivity is not too far away from a typical stone (1.7 to 3) or standar concrete (1.7). Dry earth has a value of 1.5W/mK. A solid brick (1.3) is more conductive than a brick wall (0.69) because the latter has air in the hollow ceramic bricks.

Why do we use insulation materials instead of just air cavities? Clearly because it is difficult to have the air still and quiet in a chamber, and avoid the convective currents. Is there a material with a thermal conductivity lower than air, but not suffering from air convective currents? Yes, and these are the noble gases: argon (0.016), krypton (0.0095) and xenon (0.00565). More about them right now.

What is the role of air thickness and infill in a double glass unit?
The insulating efficiency of a standard double glass unit depends on the thickness of the air space between glass sheets. Too little space results in conductive heat loss: the inside surface of one pane cools the surface of the other pane. Too wide a gap results in convection current losses: air begins to circulate because of temperature differences and transfers heat between the panes. Glass sealed units achieve their maximum insulating values using an intermediate space between 16 and 19 mm.
This is fine, but not enough. Reducing the U-value from 2.9 down to 2.6W/m2ºK is fine, but it represents a 10% reduction only. Why do we get an even lower thermal transmittance (and thus a lower U-value) by replacing air with argon in a double glass unit or in a high quality foam insulation? Which one of the three heat transfer modes is retarded here?

Replacing the air in the intermediate space with a heavy gas, slightly denser but much more viscous than oxygen and nitrogen, is helpful because its higher viscosity reduces convective heat transfer. Argon (whose thermal conductivity is 67% that of air), krypton (with a conductivity 2.5 times smaller than air) or xenon (4.2 times smaller) do increase the insulating performance of the whole glass unit because of their reduced convective transmission besides their lower thermal conductivity. Argon, krypton and xenon are used because they are non-toxic, clear, odorless, chemically inert, and commercially available, but their cost grows exponentially with their alphabetic order. That is why argon is the one most commonly used, always in combination with low-e coatings. By the way, the more effective a fill gas, the thinner its optimum thickness becomes. For example, the optimum thickness for argon is lower than for air, and lower for krypton than for argon. This is good to know because these infills are expensive. All considered, an air space of 15mm with argon at 95% or more is a very good selection if you have to reduce your U-value in glass. But remember to add a low-e coating as well!

Is U-value really constant?
More tricky things: the U-value is calculated under standardized conditions, usually under an air temperature of 20ºC inside and 10ºC outside, a surface emissivity of 0.9, a 50% humidity and an external wind speed of 4m/s. Air in movement should have a certain influence on the thermal resistance of an outer surface: wind increases the interaction between the wall and the outer air layer, and conductivity is higher. But the air temperature? Does this mean that U-values vary with temperature? Yep. Now, does U-value increase under cold or hot temperatures? Does U-value increase or decrease with a strong wind? Which of those two variables is more important?

To cut a long story short, what are the parameters that can really modify the mean U-value of a wall?
U-value matters, but so does air permeability
Please remember this: the insulation quality of a wall is affected by other factors not addressed by U-value classification. Although the U-value laboratory test captures the effects of convective loops within the insulation, it cannot measure the amount of air leakage through a real wall assembly once the insulation is installed. The rate of air permability in a wall is affected by:
Because of these factors, a wall assembly insulated with fiberglass or mineral wool blankets will usually perform worse than a wall assembly insulated with a continuous sprayed foam, even when the foam has the same U-value as the blankets. The difference is due to the spray foam’s ability to reduce air leakage, not to any difference in U-value between the two materials.
To obtain the best performance from fiberglass or mineral wool insulation, the US Energy Star Homes program requires most fiberglass-insulated framing cavities to be enclosed by air barriers on all six sides. It makes sense, but it’s hard to achieve on site. 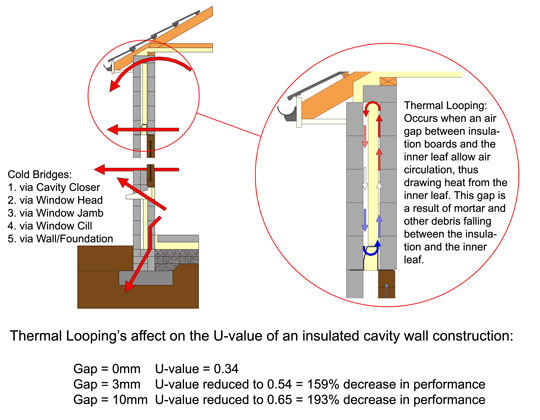 Cold bridges or thermal bridges are clearly an interruption to the continuity of insulation and thus an increase of the general U-value of the wall. But there is a less obvious type of cold bridge, shown above, known as thermal looping: an air gap of more than 1mm between the insulation and the inner wall leaf allows air circulation, creating convective currents and leading to a significant reduction of the overall U-value. This was first presented by Jan Lecompte in a paper of 1990, named 'Influence of natural convection in an insulated cavity on the thermal performance of a wall'. How many of us know about it, and take care of it in our details?

Well, somebody knows it, but not too well. The standard EN ISO 6946:2007 has an annex D called 'Correction to thermal transmittance'. One of the corrections covers thermal looping. I don't like the way it's done though, because it does not include the gap thickness as a variable, and the so-called correction is too small: you just have to add less than 0.04W/m2K. In this case, sorry to say chaps, calculations don't match measurements!

Some suppliers of radiant barriers or spray foam insulation, well aware of these issues, tend to imply that U-value measurements are meaningless. U-value is of course a very useful measurement, but just because you know a product’s U-value doesn’t mean you know everything necessary to predict the real heat flow through a wall or a roof. No one has yet invented a magic number that replaces the requirement for designers to study and understand building physics principles.

The fact that heat flows through a layer of insulation doesn’t mean that the insulation isn’t working. By definition, insulation slows down heat flow; it doesn’t stop it. Heat will always flow from hot to cold. The more insulation and the lower the air permeability, as we have seen, the slower the heat flow.

The R-value of any homogenous layer is its thickness (in m) divided by the conductivity of its material. Thus, a good insulation material which has a very low conductivity will have a high resistance. Conductivity is a constant for any given material under certain conditions, while R-value depends on the material thickness. That is why most of the insulation materials in the market come with their R-value: each value defines every product (given a certain conductivity and a commercial thickness). Good insulation materials have an R-value of 5, 6 or even 10. These values are not in the SI, but in the typical US unit system: ft2·ºF·h/BTU·in (notice that ·in at the denominator: R-values are usually expressed per inch, to allow for comparison) 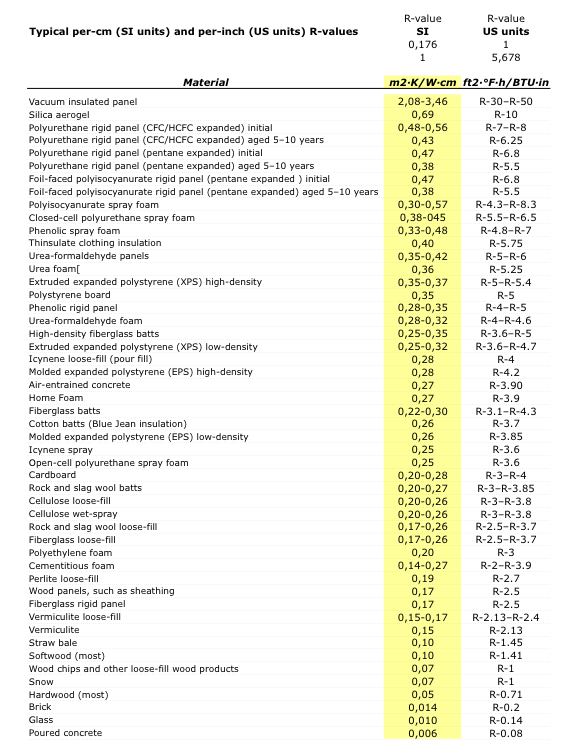 Where can I learn more?
European (EN) and worldwide (ISO) standards have a bad reputation: they are definitely not easy to read. How could they be easy, having been written by a committee? But that doesn't mean they are not interesting, if what you are looking for is guidance or precision.
These are my five favourites in relation to thermal transmission:

Excellent post. I enjoy your blog and posted the link on mine.
Two comments:
The parameters that can really modify the mean U-value of a wall: Doesn't thermal transmittance also depend on the shape of the assembly? E.g. if one or more air-facing surfaces are expanded to form a heat sink, the heat transmission through the projected unit of area (one square foot or square meter) of this assembly would be higher than otherwise. This effect is seen e.g. at corners.
The emissivity case with aluminium: I think more frequent case is the increase of emissivity by not-so-special coatings, including dust, ordinary paint, fireproofing coating. If an aluminum surface is covered with more emissive material, its low-emissivity benefit is lost. See also the relevant (fourth) question in my trivia "Facade Engineering -Material Science in Practice," here: http://www.facade-doctor.com/information.html#trivia.
Regards,
Kaz

In the section, "Is U-value really constant?" you first say higher outside temperature will decrease the U value (Norway vs. Saudi). Then right below this it appears the opposite appears. An increase in external temperature causes an increase in U not a decrease as before.

What are all the factors which go into this calculation? How are you doing these calcs? Is there a standard which maps these out?

Thanks for sharing the valuable points, i think it still works.

Great post.Just to point out that the relevant code for thermal bridges is ISO 10211. I am sure you just made a typo