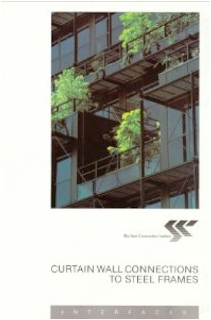 A visit to the Arup central library in London is always a great experience. The other day I found this book, out of catalog and unavailable in Amazon: 'Interfaces - Curtain wall connections to steel frames'.
One of the interesting sections is devoted to discussing the tolerances that a designer should always consider between the plane of the building facade and the alignment of the structural steelwork. For the purpose of this post, the main structure can be steel or concrete, and the lightweight facade can be a curtain wall or any other system.

The idea of writing about this issue comes from an architect with whom we are working these days. The project name and location aren't relevant. Our architect wanted to stick the curtain wall plane to the front plane of a steel column, with no space in between. This would surely make a nice detail as shown on a Scheme Design drawing: all flush and neat. We have had to go some length to explain something quite clear to us facade engineers, but obviously not so to architects in general. The point in discussion was the need to consider a separation between the main structure and the inner plane of a curtain wall. Why is it necessary, and how big should that space be?

Let's go with the why first
The structure of a building is not built by Swiss watchmakers. For example, the edge of the steel decking is is often set out from the centre line of the steel beam. In a concrete structure, the formwork is positioned in relation to the axis of the adjacent columns. Both are not proper methods - the setting out line should be the main axis lines at each floor. The result is that dimensional variations in the positioning of beams or columns are transferred to the alignment of the edge of slab. Add movements of the formwowk (in case of concrete) and you have a wobbly line instead of a perfect vertical plan.

The same, at a much smaller scale, happens with the curtain wall or lightweight facade installation. Facade contractors use accurate positioning tools as laser beams for the setting out of their lines and brackets. The image to the left is a high quality laser level, capable of self-leveling in horizontal, vertical and plan. The reader unit can find the laser beam as far as 800m away. But its accuracy is not perfect: +/-3mm vertical misalignment every 30m. Add small mistakes when marking lines with chalk on the concrete slab, bracket positioning and profiles drilling, and there you go with a certain degree of variation.

Now the dimensions
How big should the tolerance space be? What I liked about the book above is the way the authors divide the requested space - the total tolerance - in three areas:
The buffer is the way to avoid breaking arms and legs in order to fix a facade in every building. But remember, they are not intended to be a relaxation of the structural specification (or of the facade installation), rather they are a recognition that sometimes work does not go as planned - even in Switzerland.
The drawings below show, nº 1 for steel structure + curtain wall and nº 2 for concrete structure and precast, my personal rule of thumb for a general structure - facade tolerance. The three areas are shown in each case.

The buffer must not be excessively large, since fixing details which have to trasfer the cladding loads across the zone will themselves become significant and costly structural elements. As the cladding contractor effectively carries the cost of the buffer, the designers should consult him to assess a realistic dimension, at least in special cases.

You've got the point now. Let's assume this is too detailed to remember; what should be the real rule of thumb for architects? Easy: the theoretical distance between outer structure and inner wall should be 60mm for curtain walls, 70mm for precast. This is easier to keep in mind.
Posted by Ignacio Fernández Solla at 20:04

Email ThisBlogThis!Share to TwitterShare to FacebookShare to Pinterest
Labels: technology

Great point, now if we just could designers and architects to remember that just because they can draw a perfectly straight line,it does not mean that building to that tolerance can be accomplished; at any costs.

You might be qualified to get a free $1,000 Amazon Gift Card.

Changing the window remedy isn’t always a hard assignment and is something which may be performed by way of one self. Apart from being interesting and creativity trying out, adorning your home with curtains can be a home maker’s favorite past time. Curtains Dubai Fatwa is the pleasant way to melt the angular strains of a transom, to lessen the noise degree in a room and to govern the access of mild from out of doors. Curtains Abu Dhabi uploads a tinge of sublime fashion, which wriggles out the beauty with ideal color mixtures.
Contact Us

Thanks for sharing this beautiful piece of information with us. If you need the best quality curtain walling installation in London then must visit New Shopfronts Ltd company.