One more example of a great old document, this time from 1955 and related to a then start-up facade system, the metal curtain walls in the United States.

This time it's a book (fully available to us thanks to the 'make no evil' Google guys) with the title 'Metal curtain walls'. It is a compilation of the papers and discussions presented at a conference in Washington in September 1955, organized by the Building Research Institute, then a division of the National Academy of Sciences. 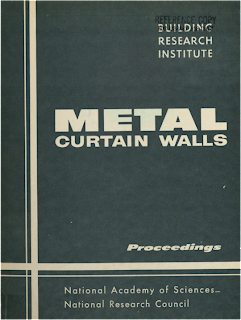 Let's start with the obvious: this conference seems to have been a well organized event, the presenters were among the best available specialists at the time, and the response of the public was overwhelming, judging by the number of companies and experts that attended the conference. It was definitely a good time to talk about the matter. Ten years after the end of the war, and just one year after the Lever House opened at 5th Avenue, there was a lot to say and to learn about curtain walls.

The presenters at the conference came from different grounds. There were architects, some big firms and some from academia. Among the former was Max Abramovitz, partner at Harrison Abramovitz in New York and responsible for the planning process of the United Nations headquarters in Manhattan between 1947 and 1952. There was also a partner from SOM, describing the firm's design method for curtain walls at the Ford Motor headquarter in Detroit. The result of an investigation from the School of Architecture at Princeton University about stainless steel curtain walls (conducted in 1954) was also presented.

There were several specialists from different manufacturing companies and some other experts on thermal and acoustic issues. One presentation discussed the role of curtain wall erectors. It is surprising to see how little things have changed in this regard: the poor chaps who installed facades were experiencing the same problems and showing the same clear logic as their equals do today.

The general impression among the panelists was that curtain walls were going to be the next big thing in facades design and construction for the years to come. They were damn right. One might expect here a lot of naive comments on the advantages of the new technology. Instead, there was surprisingly very few self-praising; quite the opposite, presenters with different technical backgrounds were rather clear in assessing the many problems still unresolved for lightweight cladding.

It seems that at the time architects and owners had fallen in love with glazed facades, whilst contractors and specialists seemed already worried about the limitations of the technology in terms of thermal & acoustic insulation, air tightness, water leakage, metal corrosion and coating durability. The summary of a survey on metal cladding panels, conducted that same years among owners and contractors, shows it cristal clear. Only 2.5% of building owners were dissatisfied, while 13% of contractors would not recommend using curtain walls again. See the details here below. 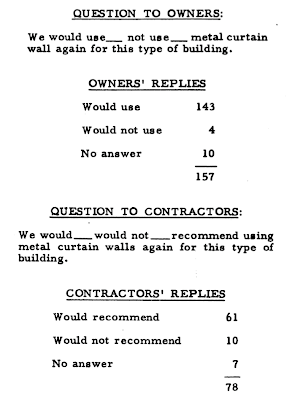 Things were bound to change in the years to come, with owners becoming less and less interested in curtain walls - but this was still 1955. The Seagram Building details were at Mies' desk by then, and Tom Wolfe had not the least idea that 25 years later he would be writing 'From Bauhaus to our house'.

The architect's view
Max Abramovitz's text is very interesting. We are literally attending to an architect's explanation of modern architecture provided to an audience of builders and manufacturers. He could be outspoken and not too academical. He started saying that the idea of curtain wall was not new, but a development of wooden skeletons and non-bearing stone veneers or other lightweight walls. He then described the factors that made curtain walls so appealing to architects. The list deserves a quotation:

The facade contractor's view
My favourite presentation, though, is the one given by the erectors representative, a such Mr. Collier, president of a facade contracting company. Among many interesting things in his text, there is a lateral comment that struck my attention. Remember, we are in 1955. Weather proofing concepts such as rain screen or pressure equalization had not been identified yet, and do not appear along the conference proceedings. On the other hand, selants based on silicone had not been developed at the time. Facade joints were caulked with Thiokol at best. Mr Collier, though, was not happy with the then predominant solution of open joints in lightweight facade panels to allow for movement, with an internal air and water sealed barrier. He prefered, based on his personal experience, an externally sealed wall to prevent water to come into the building in the first place. Well, of all the predictions made in this interesting book, the preference of Mr. Collier for externally sealed facades was going to become the mainstream solution in the US, as soon as silicone became available, and lasting until today. Dow Corning was going to be more convincing to American builders and architects than the rain screen principle.
We Europeans laugh at the Americans love for sealed joints in stone or aluminium veneer facades. But apparently Americans prefered the reasoning of Mr. Collier, an entrepreneur, to that of G.K. Garden in 1963, a researcher from a Canadian building institution and the father of the open joint design in modern facades. And they still do...
Posted by Ignacio Fernández Solla at 22:01